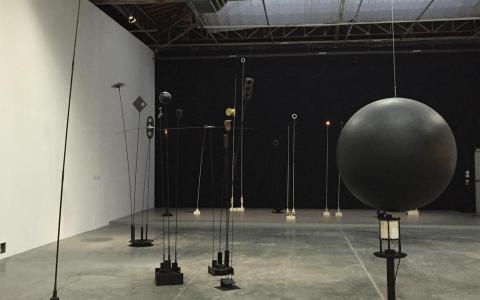 Takis was the first to “send a man into space”, 6 months before Yuri Gagarin in 1961. He was attracted by the invisible forces of magnetic fields, which he linked to the fourth dimension.
Born in Athens, Takis moved to Paris in 1950, to become a major figure of the post-war era. He combined art and science throughout his works, as he focused on exploring magnetic fields energy.
The exhibition taking place at The Palais de Tokyo will be gathering 50 works of the greek artist, who featured works combining different elements as light and magnets to celebrate the vital forces of the universe.
The Palais de Tokyo is then holding the largets monography devoted to Takis, a tribute exhibition meant to honor and celebrate the artist who’s turning 90 this year.
So, if you’re staying at Hôtel de La Motte Picquet, don’t miss the opportunity to assist to this major cultural event in Paris. Enjoy!