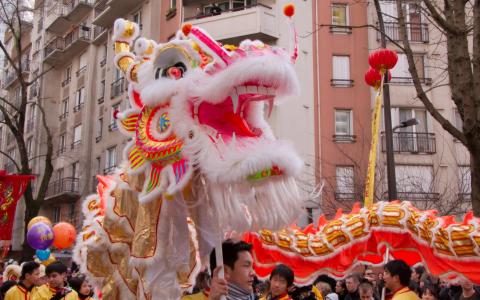 This year the Chinese New Year will fall 19 February 2015 celebrating the Goat year. Around that date, many festivities, parades and performances will take place in Paris (Marais, Belleville, 13th).

The 13th arrondissement in Paris, reputed to be Chinese district par excellence, is the perfect place where you can enjoy these festive parades in a very Chinese like atmosphere.

As every year, the 13th will offer a show that will bring together thousands of people (about 200,000 people) from all corners. These festivities mark the end of the year of the horse, and it leaves room for the goat for a year, which we hope will be full of surprises.

The Chinese New Year Parade 13th will take place on Sunday, February 22, 2015 from 13h.
The parade will start at around 13h and will certainly follow the following route:
44 Avenue d'Ivry
Avenue de Choisy
Place d'Italie
Avenue d'Italie
Rue de Tolbiac
Avenue de Choisy
Massena Boulevard
To: Avenue d'Ivry
To you, dragon dances, lion dances, costume parade, traditional dances and Chinese folk dances to the sound of firecrackers! An appointment not to be missed!

Guests staying at the Hôtel de la Motte-Picquet who like festive parades and mainly lovers of this folkloric event will be delighted with such an enchanting show that will take place in different districts in the capital, not only in the 13th arrondissement. Luckily enough, they will be held in different periods!