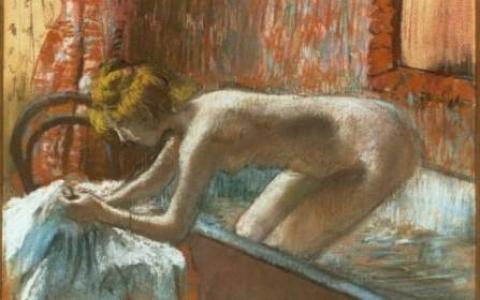 Degas and the nude at the Orsay Museum

Degas and the nude at the Orsay Museum

"Until now, the nude had been represented in poses which presupposed an audience. But my women are simple people. " For over twenty years, we expected an exhibition of Edgar Degas in Paris after the 1988 major retrospective at the Grand Palais. This time, the Orsay Museum presents dozens of works by the artist on the theme of the nude. Degas, born in1834 and died in 1917, is forever, in the public mind, the painter of dancers and horse races. The depictions of naked women is yet a common thread in his career and can appreciate the evolution of his art, rather academic in its beginning but singularly modern thereafter. While it is described as impressionist in art magazines, it is far from the known canons of the XIXth century movement, always preferring the chiaroscuro of  bedrooms and operas to the typical sunlight of Monet, Cezanne or Renoir . The works gathered here by the Orsay Museum in partnership with the Museum of Fine Arts of Boston come from the greatest museums: the National Gallery in London, the Metropolitan of New York, the Getty in Los Angeles, the Philadelphia Museum of Art , The Art Institute of Chicago or the National Gallery of Art in Washington. Paintings, drawings, prints and many pastels demonstrate the originality of the creative process of Degas. The women are captured in a realistic way in their daily lives, while having a bath, brushing their hair... Lighting effects are expressive and extremely bright colors are intensified gradually as  the eye problems Degas was suffering from were accentuated. The staging of his paintings are amazingly modern: tight framing, high and low angle ... They show the love of photography of this   multidisciplinary artist who will also devote himself to sculpture.