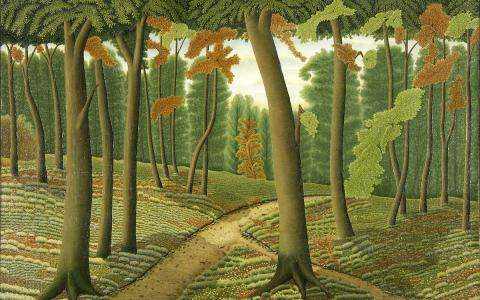 From the Douanier Rousseau to Séraphine at the Maillol Museum

The Musée Maillol presents an exciting exhibition featuring often overlooked artists whose work is described as naive or primitive modern, and who followed in the footsteps of Henri Rousseau and Séraphine Louis. Situated close to the Musée Maillol in the 7th arrondissement, the Hotel de la Motte Picquet recommends that you experience this original artistic approach that produced dreamy and colourful works full of charm.

A remarkable exhibition at the Maillol Museum

The Musée Maillol presents, from September 11th, 2019 to January 19th, 2020, a major exhibition called From the Douanier Rousseau to Séraphine: The Great Naïve Masters. The works, presented via a thematic route, were created by largely self-taught artists who renewed painting in a very specific way, away from any avant-garde or academic movement. The focus is on artists from the interwar period, many of whom are comparatively little-known, including Ferdinand Desnos, André Bauchant, Camille Bombois, Dominique Peyronnet, Jean Eve, René Rimbert and Louis Vivin. The inventiveness of each artist and the pictorial qualities of each work are made clear.

The artistic approach of naive painters

The exhibition highlights the pictorial qualities of the artists and reveals their great inventiveness. The Musée Maillol reveals the subversive aspects of naive art by taking an analytical, perceptive and historical approach to presenting the creativity of these so-called naive, primitive, modern or anti-modern painters. It was the collector and art critic Wilhelm Uhde (1874-1947) who discovered and defended these artists. With the exception of Rousseau, they were born in the late 19th century and experienced the development of the industrial era and the First World War. They all supported themselves and their artistic ambitions with often modest jobs and tended to be self-taught, developing their skills with the help of illustrated books, catalogues or postcards.

You will be delighted by the charm of this original and surprising exhibition that shines a spotlight on artists who pushed against the prevailing artistic currents of their time.