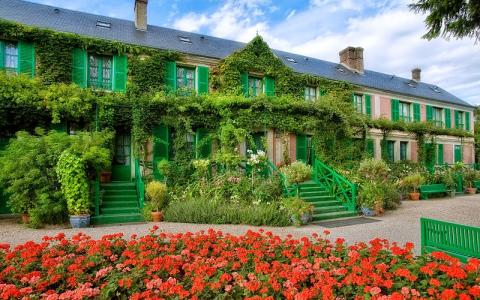 At the gateway to Normandy, 75 km from Paris, the village of Giverny is located on the right bank of the River Seine. This is were Claude Monet lived for almost 43 years from 1883 to 1926. Monet discovered the village whilst looking out of the train window (the line has since closed down) and he was enthusiastic about the spot. He found a large house to rent and moved in with Alice Hoschedé, his lady-friend, his two sons and her six children.

Originally the house was a farmhouse with a vegetable garden and on orchard of over one hectare. In 1890 he became the owner of the house and gardens and transformed them completely. In front of the house lies the "Clos normand", full of flowers (100, 000 plants replaced each year and 100, 000 perennials) on the other side of the road he had the waterlily pond dug. To achieve his aim he didn't hesitate and diverted a branch of the Epte River, the "Ru".

Claude Monet had a real passion for gardening as well as for colours and he conceived both his flower garden and water garden as true works of art. Visitors can still feel the atmosphere which reigned at the home of the Master of Impressionnism and marvel at the floral compositions and nymphéas which were his greatest sources of inspiration.

Another passion of Claude Monet was Japan. This passion led him to introduce, in an unexpected way, various Japanese touches into the completely original universe he had created in Giverny. The inspiration he drew from the Japanese art of gardens is clearly visible in the planning of the pond which he transformed into a spectacular "water garden"

The visit begins with the "reading room", also called the "little blue sitting room" which communicates with the pantry where tea, olive oil, spices etc. were stored. One then enters the artist's first studio, in which he worked until 1899. This room later became a cosy sitting room, where coffee was served, while being surrounded by familiar objects, photographs and the Master's paintings.

Also on the first floor are the dining room and kitchen. The dining room has been restored with precision. Visitors can admire the collection of Japanese "estampes" on the yellow walls. The furniture, also painted yellow, was considered very modern at the time. In the kitchen, with its blue Rouen tiles, the impressive cooker with multiple ovens and the copper utensils seem to be waiting for the return of their owners.

A first flight of stairs leads to the floor on which the private rooms are situated. First, Monet's bedroom where his desk and 18th century chest of drawers still remain. Numerous paintings by the Great Masters used to hang on these walls. They have now been replaced by period paintings. Through his bedroom windows, the artist could admire the "Clos Normand" and his favourite climbing rose "Rosa Mermaid".

The visit continues through their dressing rooms and on to Alice's bedroom, leading to a tiny sewing room.

When Monet settles in Giverny, the long, pink stucco house has a one hectare garden comprising an apple orchard and a kitchen garden. A wide path lined with cypress and spruce leads from the gate to the main door, the flowerbeds bordered by trimmed box trees. Enthralled by this garden, Monet immediately sets to work, never ceasing, thereafter, to improve the "Clos Normand" and to make it the garden of his colourful dreams.

Monet has the box trees uprooted and the spruces cut down and replaced by the metallic arches still visible today. The central path is lined with nasturtiums and fragrant roses, which continue to enchant visitors. The apple trees are replaced by cherry and Japanese apricot trees, the ground becoming a carpet of thousands of flowers: daffodils, tulips, narcissus, iris, oriental poppies etc.

Passionate about gardening, Monet applies his pictorial knowledge to creating perspectives, highlighting the house and intensifying areas of shade. On the left side of the garden, he creates rectangular beds of single colours, resssembling so many colours set out on an artist's palette.......

Monet has always been fascinated by the play of light and reflections of clouds on water. In 1893, he acquires a piece of land situated at the end of the "Clos Normand", on the other side of the railway line, and diverts the narrow arm of the river Epte. The thus created pond will become the "Water garden", today present on the walls of the world's greatest museums.

In line with the central path of the "Clos Normand", he has a Japanese bridge constructed, certainly inspired by one of his "Estampes" : he has it painted green, to distinguish it from the red traditionally used in Japan. The oriental atmosphere is recreated with the choice of plants such as bamboos, maple trees, Japanese peonies, white lillies and the weeping willows which so marvellously  frame the pond. Lastly Monet plants "nymphéas" in the pond itself.

Monet was so proud of his water garden that he liked to receive his guests there, and spent hours contemplating it. A full time gardener, in charge of its maintenance, removed each dead leaf to ensure the perfect beauty of the pond.

In 1897, he starts to paint the "Nymphéas". In seeking to capture the atmosphere of this surface of sky, on which touches of colour float, Monet is to achieve one of his greatest masterpieces and push his painting to the limits of Abstract Art, in which the vibration of colour is sufficient to evoke a world of feelings and emotions.

Children under 12 years and students: 5 Euros

Children under 7 years: free of charge