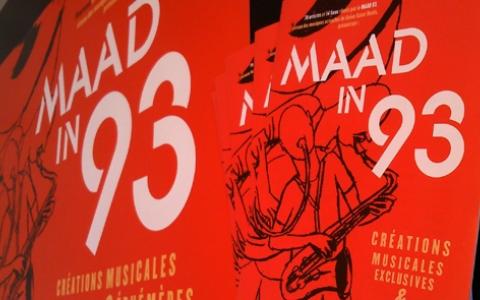 Since 2011, the MAAD 93 MAAD organizes the festival in 93 2, which offers new encounters between artists of the department, created especially for the festival. For three weeks in the fall, 14 venues and 70 artists explore new musical horizons, ignoring the aesthetic barriers. Each festival date is the result of a meeting between several artists, experimenters talent, having built some of their musical history in Seine-Saint-Denis.

This year the festival promises a MAAD in 93 rich blending different genres for a variety of new concerts programming: an offset between the Trio HiPass meeting, Marc Nammour the Scoundrel and flutist Naissam Jalal, a duet song between Alexandra Gatica and Djeudjoah, a trip between Afro-Cuban percussion Natascha Rogers, tender melodies Brothers Makouaya and reggae Mo'Kalamity an exchange between Gypsy music and jazz for Bratsch and Macha Gharibian or Arnaud Van Lancker, and Atcharav Emilio Castiello, a face to face between the impulsive amazing rock of We Insist! and the poetic world of Loic Lantoine, which also will mix his repertoire to slam bassist Dgiz, accompanied by saxophonist Mehdi Chaib, and guitarist Claude Barthelemy.

These meetings will be born exclusive and often ephemeral.

Guests staying at the Hôtel de la Motte-Picquet from 19 September to 5 October have the chance to attend one of these concerts to explore new musical horizons.