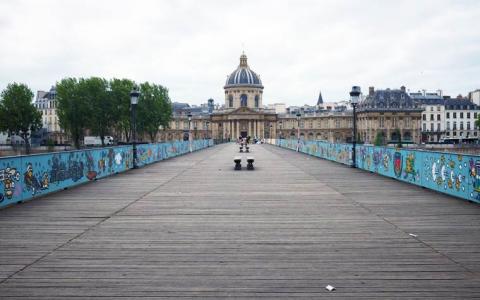 The Pont Des Arts, the romance symbol and the must see tourist spot, is changing the look and removing forever the love padlocks "Cadenas D'amour". The council of Paris chose to remove all padlocks of the bridge for security reasons. Instead, the Paris City Hall and Mehdi Ben Cheikh, director of the Gallery Itinerrance asked four artists to imagine street art paintings for the bridge's new look.

Jace, El Seed, Brusk and Pantonio, have replaced the 45 tons of padlocks with 56 panels of 150 meters long. The Pont des Arts has never carried his name as much as it now does.

Love weighs for some, and in Paris, it has a weight of 45 tons! The sealer padlock love romantic couples, who, passing through Paris, came and capture (trap) their relationship, were removed from the famous Parisian work which could not bear this metal accumulation. Some bridge railings had collapsed. Monday 1 June 2015, the City of Paris began to withdraw the thousands of padlocks, saw shots. Signs have been installed to replace the rails: artists from the street art scene express themselves. Among them, Jace, the graffiti of Le Havre (Seine-Maritime), famous for its Gouzou.

The project designed by the prolific and talented Mehdi Ben Cheikh Itinerrance Gallery director, in collaboration with the City of Paris for which street artists like Pantonio, Jace or El Seed are now making huge murals on wooden panels, which are gradually replacing the lockson the bridge.

Guests staying at De La Motte Picquet Hotel will be within 10 minute drive to discover the new version of Pont des Arts starting from June, 8, 2015.