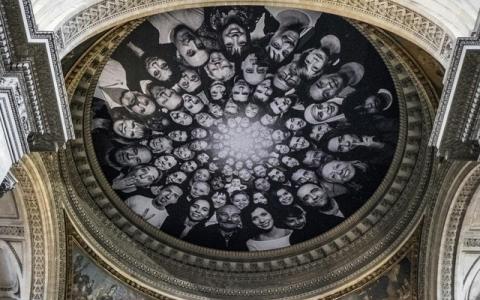 Street Artist JR Brings a Photography Installation to the Pantheon

Although it originally started as a church, the Pantheon now serves as the burial site for some of France's most prestigious historical figures. Its many inhabitants include Marie Curie, Emile Zola, Alexandre Dumas, Voltaire, Jean-Jacques Rousseau and Victor Hugo. Moreover, its early neoclassic structure makes it one of Paris's must-see monuments for fans of architecture. In fact, the facade was inspired by Rome's Pantheon.

In addition to the mausoleum and the architecture, there is now another reason to visit the celebrated Pantheon in the 5th arrondissement of Paris: an art installation by contemporary street artist JR. In an attempt to bring the Pantheon closer to the people, JR has created a piece that reveals photographs of everyday people on the dome of the monument.

The dome of the Pantheon is currently being renovated — and is therefore surrounded by construction infrastructure — so JR wanted to assert that the monument is still a thing of beauty. Therefore, a large canvas has been added to the dome showing the portraits of approximately 400 participants, visible from the inside of the building. The canvas was inaugurated on June 3, 2014. Amazingly, JR's piece will remain in place for more than two years.

That gives guests staying at the Hotel de la Motte Piquet plenty of time to check out the monument in its altered state. The renovations will last for a very long time, as the last step of the renovation process is not planned to begin until 2022. Right now, the first step is to work on the dome, and that will be completed in 2015. Despite the reconstruction, the Pantheon remains an important and beautiful site to visit in Paris.