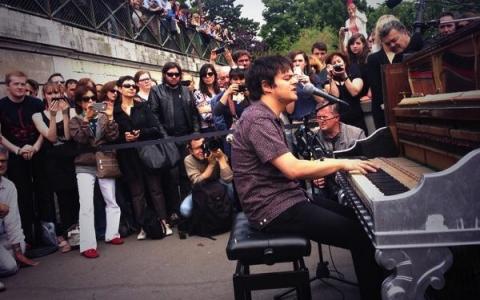 Street Pianos Liven Up the City of Paris During the Summer

For an event called 'Play Me I'm Yours,' organizers have arranged for 50 pianos to be installed throughout the City of Light. In various public places, such as the banks of the Seine and the Buttes-Chaumont park, these pianos can be played by anyone who chooses, bringing an interesting musical experience to the most beautiful city in the world.

The pianos are making their appearance from now until July 10, 2014. 'Play Me I'm Yours' was imagined and brought to life by Luke Jerram. The English artist began in 2008 and his idea grew into a worldwide initiative that is now deployed in numerous countries around the globe.

Jerram has explained that he got the idea from a visit to his laundromat. After running into the same people there weekend after weekend without ever exchanging a word he realized that he wanted to harness the power of these unspoken communities who get to know each other in silence. By putting pianos in public spaces, he hopes to encourage more conversation and social interactions amongst communities that normally remain quiet.

The pianos that are part of the event are not just any pianos; each piano has been decorated by a different visual artist. Fifty artists in total have participated to bring color and life to the already lovely instruments. Included in this group of artists is Miss Tic, Ernesto and C215.

The event reaches six million people in 46 cities internationally through the installation of 1,300 pianos. From New York to Barcelona to London, the pianos bear the simple directive 'play me, I'm yours,' inviting whomever stumbles upon them to spend a few moments tickling the ivories.

Guests staying at the Hôtel de la Motte-Picquet can explore Paris while at the same time enjoying this cultural installation. Visitors can get more information about the locations of the pianos in Paris on the Play Me I'm Yours Paris website.