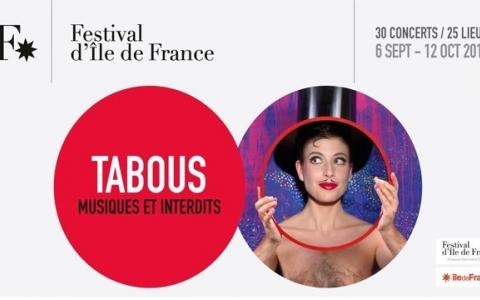 Taboos: music and the forbidden

If you like discovering new music artists from around the world, so do not miss the 2014 edition of the Festival d'Ile de France, which will be held from 6 September to 12 October in several places of the capital and Ile de France.

For 38 years, the Festival d'Ile de France Ile animates fall in Paris with thirty concerts, including a majority of creations, articulated around a theme each year renewed. Its varied program features classic music from the Renaissance to contemporary, world music to contemporary music, often with links between these directories.

For its 38th edition, the Ile-de-France Festival has chosen the theme “Taboos: music and the forbidden” given the fact that music, throughout its history, has not always been as unifying as it can be today. Certain genres have even been censored or prohibited

There will be thirty concerts in twenty-five different locations, for a programme which will be eclectic and surprising throughout. In it you can go on a trip to India with the Nrityagram company, or to Ireland with the Saint-Julien Musicians, head back to the Middle Ages with the De Caelis ensemble, or enjoy an intimate visit in a European music hall with the New Burlesque cabaret.

The highlight of the show is the ten unpublished concerts organised around the domain of Villarceaux, with no fewer than 50 Columbian artists, with their brass and percussion instruments. And the festival is not happy with concerts alone: it also offers workshops, as well as meetings and discussions on taboos. It’s an edition which showcases music that wants to be free and rebellious.

Guests staying at the Hôtel de la Motte-Picquet  should not miss such an event that will take you in a journey worldwide through "forbidden music."