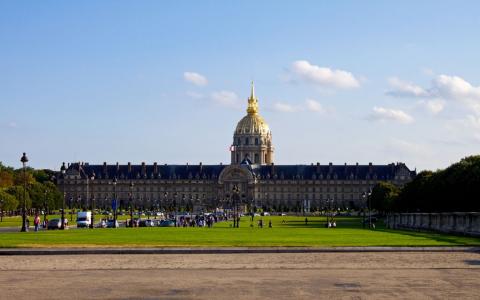 The National Residence of the Invalids

Hotel Motte Picquet Paris is located just few minutes from the Hotel des Invalides in Paris. Designed and built at the request of Louis XIV, the Hotel des Invalides, since 1674, hosted disabled soldiers and war veterans without resources. Behind its majestic facade, the residents lived in companies and worked in various workshops. About 4000 people lived there in the late 18th century. Even today, the hospice and the hospital of the Hotel des Invalides continue to operate. In 1905, the Army Museum was housed in the Hôtel des Invalides. Its collection of objects of war shows the whole military history of France. Church of SaintLouis andInvalides Dome In 1677 a church was built to complement the existing infrastructure. Upon request, the architect Hardouin-Mansart designed a royal chapel called "the Invalides Dome" and, in its extension, the Church of Saint Louis for the soldiers. The church was later turned into national military pantheon at the request of Napoleon Bonaparte. The remains of many military leaders, but also those of Napoleon 1st, his son L'Aiglon, and his brothers are based under the nave of the church. Under the arch of the church, you will see the flags taken from the enemy from 1805 to the 20th century, according to tradition. Courtyardof the Hoteldes Invalides The main courtyard of the Hotel des Invalides has an exceptional collection of 60 bronze French classics cannons, gem of Artillery collections of the Army Museum. Reach the Hôtel des Invalides

Hotel Motte Picquet Paris, a 3 star hotel located just few steps from the Invalides and the Eiffel Tower in Paris.