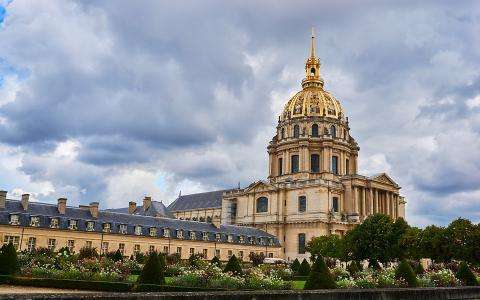 Visit the Army Museum and the Invalides monument

In the heart of the 7th arrondissement, near the Hôtel de la Motte Picquet, can be found the prestigious Hôtel des Invalides. This complex of buildings and its huge golden dome, a Parisian landmark, is home to the Army Museum and monuments relating to French military history. Here you can see a magnificent collection of weapons, uniforms, armour, military models and more, as well as the tomb of Napoleon.

Opened in 1905, this museum retracing the military history of France is now one of the most important museums of its kind in the world. In display areas covering more than 8000 m2, the museum and its two churches present some 500,000 objects (weapons, armour, uniforms, photographs ...). These are arranged along a chronological route going from antiquity to the end of the Second World War.

The museum is divided into various areas dealing with specific subjects such as artillery; old, modern and contemporary military artefacts from around the world; the French Resistance;, 100 superb military models dating from the 17th to the 19th centuries; and an interactive space dedicated to the life and work of Charles de Gaulle.

What you need to know about the Invalides monument

The Hôtel des Invalides was built by order of Louis XIV as a home and hospital for aged and unwell military veterans. Under the dome of the Invalides is the tomb of Napoleon I, his brothers Joseph and Jerome Bonaparte, and his son, as well as the generals Duroc and Bertrand and the Marshals Foch and Lyautey.

Note: A ticket is required to visit the museum, church and tombs, but admission to the courtyards and gardens of the Invalides is free.